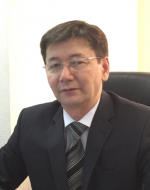 In 1980 he graduated from the Karaganda order of the ed banner of Labour Polytechnic Institute and qualified as a mining engineer-surveyor.

From 2009 to 2014, the Eurasian Group as the Director of the Department of environmental and occupational health, 2014-present General Director of LLP "NIPI Kaztechproject", Vice President of LEAN in.

Eurasia is a single geological system