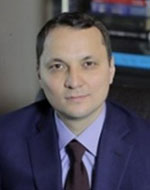 Vice-Minister, Ministry of Industry and Infrastructure Development of The Republic of Kazakhstan

He is a graduate of the Academy of National Safety Committee of RK, Kokshetau State University named after S. Ualikhanov majoring in Finance, Kazakh National technical University named after K.I. Satpayev majoring in Geology and mineral exploration. From 2003 is in public service, in 2006 has worked as a Deputy Head of “Kazgeoinform” RCGI of Subsoil Use and Geology Committee, Director of the Department of National Mining Company “Tauken-Samruk”. The last position taken was a Director of Subsoil Use Department of the Ministry of Investment and Development of the Republic of Kazakhstan (2013-2016 years). From January 2016 – Ethics Officer of MID RK. By the Decree of the Government of RK №399 dated 11.07.2016 Toktabayev Timur Serikovich was assigned as a Vice-Minister of Industry and Infrastructure Development of The Republic of Kazakhstan.

Welcome on behalf of the Government of Republic of Kazakhstan

Improving the legislation of the Republic of Kazakhstan in the field of subsoil use.