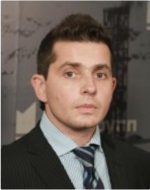 Vladislav Kaminski is a graduate of Lomonosov Moscow State University. After graduation in 2000 he moved to Canada, where he worked as a geophysicist at Fugro Airborne Surveys (currently CGG). In 2004 Vlad entered a Ph.D. program in geoscience at the University of Pittsburgh (USA), where he was at the same time employed at the US Department of Energy, National Energy Technology Laboratory (NETL DOE) as a research associate. Upon his graduation in 2008 with a Ph.D. degree, Vlad moved to Toronto to join Geotech, Ltd as a senior geophysicist. In late 2010 Vlad changed his affiliation to a Post-Doctoral Fellowship at the University of British Columbia (Vancouver), where he worked as a research associate at the Geophysical Inversion Facility (UBC-GIF) under supervision of Douglas Oldenburg. In 2014 Vlad has joined Aarhus Geophysics ApS, as a senior geophysicist, the position, which he holds up to date. In addition, Vlad is involved with consulting for mining clients internationally together with Promiseland Exploration, Ltd (Canada). Vlad has numerous scientific publications on geophysical inversion, especially in application to gold and kimberlite exploration.

The case study shows exploration benefits of using 3D cluster analysis, which is based on merging the results of 3D inversions of airborne magnetic and legacy gravity data. The study was carried out on a regional scale in Northern Kazakhstan over area prospective for gold and 3D pseudo-lithology with interpretation was provided to depths of 2 km.