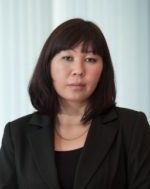 Born on 04/02/1983 in the village of Sosnovka, Beskaragai district. In 2000 she graduated from Sosnovsk secondary school. In the same year she entered the Semey Geological Prospecting College, from which she graduated in 2003. Since 2003, she worked at Kazpromgeofizika LLP, Tyumenpromgeofizika LLP as a geologist, combining studies at the correspondence department in KazNTu named after K.I. Satpayev in the city of Almaty. Since 2009 I have been working as a teacher of special subjects at the Geological Prospecting College.